A Killer on our Streets, in our Yards and Bush

by Bob Luttrell, Bob the Beeman. (B Ag Sc)
www.bobthebeeman.com.au 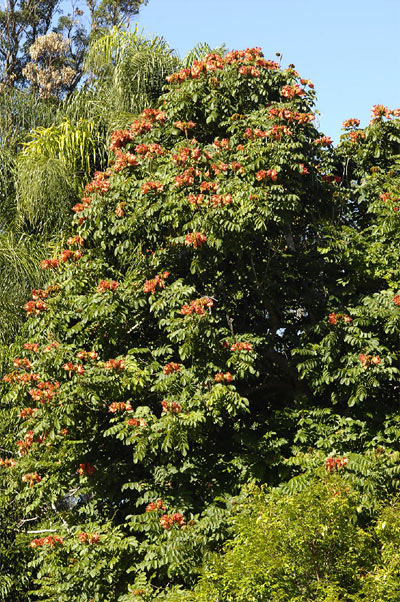 The African Tulip Tree (Spathodea campanulata) is listed as a Class 3 pest by the DPI, and can no longer be sold or distributed in Qld. However its past history of distribution as a street and landscaping tree has ensured plentiful escapes into natural and urban habitats displaying the behaviour that justifies its inclusion in the Global Invasive Species Database “Top 100 World’s Worst Invaders”.

Drive around most suburbs of Brisbane or other Queensland towns and the chances are you will see examples on the the footpath or in yards. Out in the countryside, its bright orange flowers stand out over the cooler months of the year.

Unfortunately if one takes the time to look closer, this beauty conceals a lethal threat to our stingless bees. Look at the sprays of flowers and you will see stingless bees attracted to the flowers for foraging. Look closer and you will see the bees gathering pollen, and seemingly imbibing other plant secretions as well as nectar. Unfortunately if you continue the examination into the flowers, you will find the result of that foraging for pollen and nectar, a collection of dead and dying stingless bees and other insects.

While I cannot say just what the chemical mechanism of the toxicity is, it seems to be quick, I have watched a bee in its death throes within the flower itself. I have collected many such specimens.

Information published in Brazil found that the gathered pollen did not get back to the hives, so the attracted bees are killed before they can return. Unfortunately the mechanism of attraction is strong and the numbers of stingless bees killed can be quite large in areas where stingless bees are present.

It seems that the natural pollinators of the African Tulip are bats or birds and the tree has evolved a mechanism to protect its precious pollen from being stolen from the early arriving stingless bees, it kills them. The tree is not fertile for some time after the pollen is released, the bats and birds are attracted at the right time by the copious release of nectar. Unfortunately the bees of its African homeland, of Brazil where it is also a weed and studies have been done, and of Australia have not learnt to resist the temptation to raid the pollen so presented when it is ready.

In Brazil, a country with a very advanced and technically aware stingless bee industry, there is wide awareness of the toxicity of this tree. It is a regular topic of conversation in stingless bee forums in Brazil and on their TV, and its toxicity has been known for decades. Universities have taken steps to stop planting and remove it from university grounds because of its effects, and their concern and value of their native pollinators. Many references on its effects have been published in that country, as well as other southern American countries. There is no doubt of its toxicity, and it may even affect some birds. The range of insects killed can be wide, and this also has been surveyed in Southern American countries. Other insects are not immune, it is not just stingless bees. There can be Apis if present. 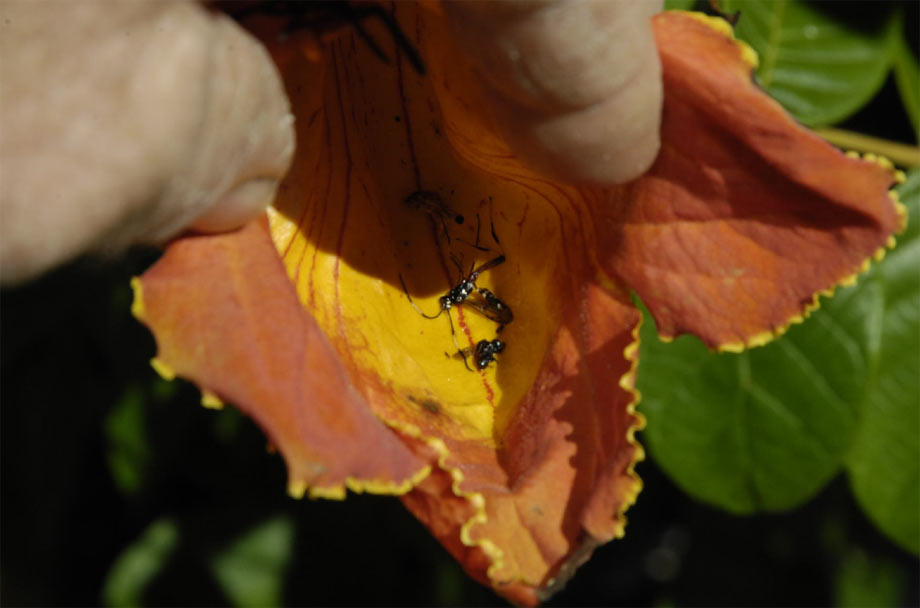 This provides yet another very powerful reason to persist in the effort to remove it from our landscape at every possible opportunity, perhaps even to step up that removal. With the decline of Apis mellifera, the honeybee, caused by the spread of the small hive beetle (Aethina tumida), our native stingless bees will assume a greater role in pollination in natural habitat, perhaps resuming the function that used to be their domain. There is a great interest in stingless bees among the general public, perhaps this can help provide the motivation to remove trees that would otherwise not be removed.

It has been said, that the African tulip tree is just one tree among many, its effect is not significant. I know of no other tree that flowers for such a long period, many months through the winter period, and most of the year in the tropics. That alone sets it in a league of its own. It is an attractive food source for the bees, at a time when there is not a lot of choice. The bees that are killed are the most experienced foragers, the scout bees, that look for sources of food for the colony. Because they do not get back to the colony, no warning can be developed, so the loss of bees will continue. In Brazil, it is enough to result in the deaths of colonies. Here that has not been documented, perhaps one day someone will do the research. What is for certain, it will result in a continuing loss of foraging bees.

I can find no evidence to show that different colour variants of this tree have different toxicities, so unless some hard evidence to the contrary is forthcoming, all should be treated the same, all regarded as toxic to bees.

Brazilians are also aware of many other tree and shrubs that have adverse effects on stingless bees. Eventually perhaps we will become aware of those here. I will try to post where I find that we have introduced any of those trees. 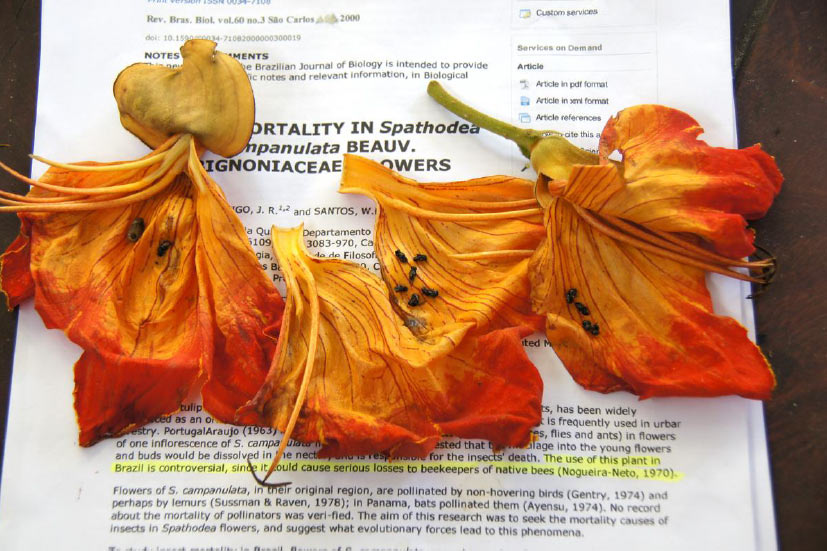 2. Even Wikipedia lists this plant as toxic to stingless bees, and others, in the section on Natural Compounds
file:///C:/BOB%20THE%20BEEMAN/AFRICAN%20TULIP%20TREE/Bees%20and%20toxic%20chemicals%20-%20Wikipedia,%20the%20free%20encyclopedia.htm

6. The following link to the Encyclopedia of Life, gives a very detailed report on the status of the African Tulip Tree in the World, and near the end a very thorough study of the insect losses it causes under the heading Threats of “Insect Tanatocoenosis.”
http://www.eol.org/pages/577860/details